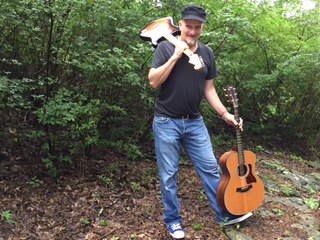 Have you ever wanted to learn how to play guitar and work professionally, but can’t find a teacher who can also share tips on making it in the music business? Meet singer/songwriter and classically trained guitarist Robert Arthur!
In addition to his one-on-one personal lessons offered locally in Nashville, TN, Robert is now accepting guitar students via Skype or FaceTime. Robert, a graduate of the University of South Carolina with a Bachelors degree in classical guitar performance, was a full-time guitar teacher in Union, SC before moving to Nashville in 1992. Robert has toured extensively with country music artists Brad Paisley, Jeff Bates, The Henningsens and many others. He has also perform with legends like Johnny Cash and Waylon Jennings, and shared the stage with a number of other country music stars.
“My guitars have seen all the lower 48 states, Canada, the Caribbean!” Robert Arthur
As a studio musician, Robert has spent many hours in different types of studios, recording hundreds of sessions, from very low-budget demos to major label records. As I songwriter he has been blessed to have had three major publishing deals, and over 100 songs recorded by small independent country and Gospel music artists, and major-label acts such as Chris Young and Brad Paisley. One instrumental cut with Paisley was nominated for a Grammy.
Robert wants to put his vast experience to work for you helping to equip you in many styles, on acoustic or electric, and to share his special insights for the guitar playing songwriter! He is passionate about the guitar and would love to put that passion to work for you! Contact Robert Arthur at:SirRobArtMusic@bellsouth.net for more information about pricing, scheduling, etc.